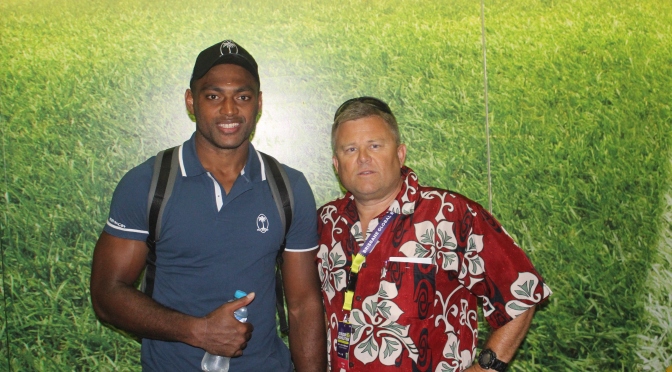 At the recent Brisbane Global Rugby Tens, I was fortunate to meet Brisbane rugby favourite, Chris Kurandrani, a couple of times between matches to discuss his future motivations after being left without a Queensland Reds’ Super Rugby contract for 2018. A rather relaxed, yet pragmatic, Kurandrani offered me some insight into his future goals in the sport of rugby union.

Born Kirisi Nasiganiyav in Brisbane on the 12th of December 1991, the son of Fijian Queensland representative, Isei Nasiganiyav, and younger brother of explosive Crusaders winger Nemani Nadolo. He is also the cousin of Wallaby & Brumbies player Tevita Kurandrani, so he has plenty of rugby pedigree. It should be noted that he adopted the Kurandrani surname in 2011 (source Wikipedia).

Despite this lineage and having first trained with the Reds in 2011 and offered a contract from 2014, Kurandrani has found himself without any room to fit into Brad Thorn’s squad at Ballymore. At 26, with still plenty of rugby in his 1.9m frame, Kurandrani sees his tutelage would be best undertaken away from the spotlight in the Land of the Rising Sun, Japan, under the guidance of John Mulvihill at Honda Heat. He told me he had not met Mulvihill but was confident that he could bring out his best and potentially play for Fiji at next year’s World Cup in Japan.

Chris’ rugby development started at the outer Brisbane Marsden State High School. With a rugby league excellence program, the school has produced luminaries such as current Australian Rugby League captain, Cameron Smith, and Wallaby great, Isreal Folau, along with other notable talents such as 17 capped Wallaby Joe Tomane now playing for Montpellier. Talking with the Principle, Andrew Peach, he was glowing of Kurandrani’s success and praised him for returning to the school to offer his encouragement to future alumni students.

After the Brisbane Rugby Tens, Kurandrani had a run for Fiji against the Queensland Reds in a 15-a-side trial match where he sustained a knock. He told me, “I’m fine it was only precautionary”. I was a little concerned when I talked to him on the sideline, but he ran on shortly after that and was fine.

We at Brisbanerugby.com wish Chris all the best with Honda Heat in the upcoming Top League season and for further honours representing Fiji at the 2019 World Cup in Japan.