Almost 12,000 people (official crowd 11,798) watched the first home match for the Reds at Suncorp Stadium last night; a 37% increase from the 8,600 that last year watched this fixture against the Sunwolves. Scoring 10 tries to 1, to win 64-5, is sure to bring the faithful supporters back and Brad Thorn said he was very excited about this team. He said, having someone like Hunter Paisami coming in for the injured Jordan Petaia was a revelation. A player in the mold that Thorn likes; trains hard with a good attitude.

Thorn has said earlier this season that his younger chargers have been progressing for a number of years, whether it be Schoolboys, U19s, U20s or NRC: “90% of our players have come through the system here in Queensland, which shows what we are trying to do here.”

The prodigal son, Jame O’Conner, erased his 2015 Reds nightmare last night as he orchestrated the Reds highest ever Super Rugby score; eclipsing there previous best 53-3 in 2011 against the Rebels.. 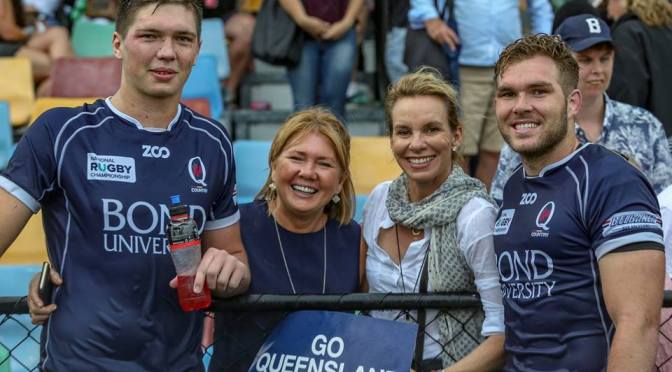 On Sunday, fans braved the second half rain at Bond University to watch the National Rugby Championship semi-final between last year’s premiers Queensland Country and the Western Force. The star-studded Country outfit did not fail to impress from the getgo with tries aplenty in the first 20 minutes. None more so than 2018 Reds bolter, 18-year-old Jordan Petaia. Some very impressive running from the young Wallabies squad member playing at outside-centre with two tries in 15 minutes under the watchful eye of Reds coach Brad Thorn, who was standing beside me. From our vantage point, Caleb Timu also ran in for a five-pointer, on the blindside, with the Western Force down to 13 men.

Hamish Stewart did not bring his kicking boots which proved costly in the first half as Qld Country went to the sheds up only 20-14, after Western Force kicker, Ian Prior, converted their first two tries. Stewart did make-up for his earlier failures with the boot in the second half with two conversions and two penalty goals, but leaving points out there was scrutinised by Reds coach Thorn.

In the 53rd minute, referee Damon Murphy called the match off due to the lightning in the area, but after about 15 minutes the play was back on. A few spectators left at this juncture, however, there were plenty that stayed, eager to watch more from the impressive Queensland Country outfit. The final score was 45-24 to the home side, booking them a place in next weeks final in Suva against Fiji Drua.

Some real standout performances by Caleb Timu and Angus Scott-Young that should see them get a future call-up to the Wallabies.

The morning rain did not dampen the spirits of Brisbane’s rugby faithful, with a healthy 3,000+ braving the cool spring conditions for the latest instalment of the Quade Cooper/Karmichael Hunt double act. Wests’ impressive Sci-Fleet Stadium hosted the  Round 5 Brisbane City/Queensland Country clash for the Andy Purcell Cup, once again attracting rain and a healthy blend of rugby diehards and novices. Not all were there for Cooper’s kick off to highly-fancied, reigning Premiers, Bond University Queensland Country. As rugby people tend to do, rocking up in the first 10 minutes is normal, so by the time Hamish Stewart crossed the chalk to open the account for Country in the 18th minute, a boisterous crowd split roughly 50/50 were assembled. The beers and cheers were still flowing two minutes later when the Cooper/Hunt show produced their first act to set up their captain, Adam Korczyk for a try. Cooper missed the conversion leaving the score 7-5 to Country, setting up the afternoon for a see-sawing affair.

Brisbane City got the jump on their more fancied rivals to go to the break up 22-12, however, it wasn’t long into the 2nd half before Tom Lucas crossed for Queensland Country to narrow the margin. By the 52nd minute, it was 29-24 to City after Country’s halfback, Tate McDermott received a Hamish Stewart purler to cross the chalk, keeping Country in touch, however, Cooper had his kicking boots on and opted for a long-range penalty to extend their lead. Replacement hooker Sean Farrell sealed City’s fourth Andy Purcell Cup in five outings going over after a maul and with Cooper’s conversion saw Brisbane City win 39-24 over last year’s premiers, Queensland Country.

The match can be best summed up by the words of City coach Mick Heenan,

“Country is such a good side and we’ve got a lot of respect for how they’ve been playing and their players as well, so certainly that’s the best we’ve played and defended all season.

“The spirit and the fight that we showed was outstanding. We needed to win to keep our season alive and we’ve got to keep winning and we can’t take anything for granted, so we have to keep at it, keep persisting and keep fighting,” Heenan added.