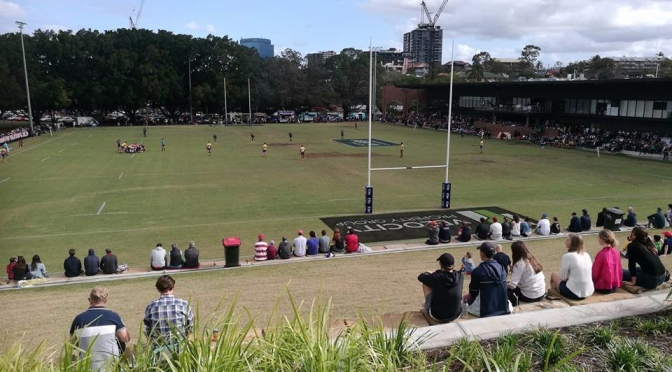 The morning rain did not dampen the spirits of Brisbane’s rugby faithful, with a healthy 3,000+ braving the cool spring conditions for the latest instalment of the Quade Cooper/Karmichael Hunt double act. Wests’ impressive Sci-Fleet Stadium hosted the  Round 5 Brisbane City/Queensland Country clash for the Andy Purcell Cup, once again attracting rain and a healthy blend of rugby diehards and novices. Not all were there for Cooper’s kick off to highly-fancied, reigning Premiers, Bond University Queensland Country. As rugby people tend to do, rocking up in the first 10 minutes is normal, so by the time Hamish Stewart crossed the chalk to open the account for Country in the 18th minute, a boisterous crowd split roughly 50/50 were assembled. The beers and cheers were still flowing two minutes later when the Cooper/Hunt show produced their first act to set up their captain, Adam Korczyk for a try. Cooper missed the conversion leaving the score 7-5 to Country, setting up the afternoon for a see-sawing affair.

Brisbane City got the jump on their more fancied rivals to go to the break up 22-12, however, it wasn’t long into the 2nd half before Tom Lucas crossed for Queensland Country to narrow the margin. By the 52nd minute, it was 29-24 to City after Country’s halfback, Tate McDermott received a Hamish Stewart purler to cross the chalk, keeping Country in touch, however, Cooper had his kicking boots on and opted for a long-range penalty to extend their lead. Replacement hooker Sean Farrell sealed City’s fourth Andy Purcell Cup in five outings going over after a maul and with Cooper’s conversion saw Brisbane City win 39-24 over last year’s premiers, Queensland Country.

The match can be best summed up by the words of City coach Mick Heenan,

“Country is such a good side and we’ve got a lot of respect for how they’ve been playing and their players as well, so certainly that’s the best we’ve played and defended all season.

“The spirit and the fight that we showed was outstanding. We needed to win to keep our season alive and we’ve got to keep winning and we can’t take anything for granted, so we have to keep at it, keep persisting and keep fighting,” Heenan added.