Well technically not, as it’s only the third biggest global sporting event. A mere 20 nations qualifying after an exhaustive elimination process, however, the tournament is three times longer at six-weeks and 12 venues from Hokkaido to Kyushu. The influx of foreign invaders will be the greatest since Commodore Perry’s arrival in 1853 at Shimoda.

Perennial favourites the All Blacks from New Zealand will be looking for an unprecedented three-peat, having won the last two incarnations in 2011 & 2015. Although, Ireland will go into the tournament as World No. 1, due to the quirky World Rugby algorithm that determines placings. Never before have the ‘Men in Green’ made a RWC Final, although their Quarter-Final match against RWC1991 winners, the Wallabies, at Landsdown Road will go down as ‘the one that got away‘.

The teams descending on Japan, somewhat delayed due to Typhoon Faxai, should be embraced by the Japanese populous along with the tsunami of international supporters. Rugby people are a different breed: beer-swilling aficionados as opposed to football (soccer in the English speaking world outside of England) hooligans. They will appreciate the culture, the ceremonies, the nature and the history that abounds there; as well as the onsen or hot springs, the most renowned are found in Beppu, Kyushu; with matches played in Oita, including two very important quarter-finals, these are a must-see (map below). 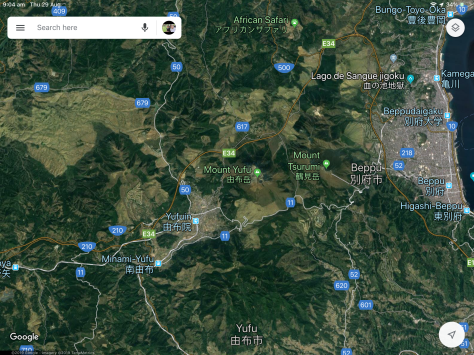 Visiting Japan 12 months out from the Rugby World Cup I got a sense that the ‘general’ Japanese population were somewhat unaware of the tournament. When questioned they would reply with, “Tokyo 2020?” Just last week at a theme park on the Gold Coast some university students visiting from Japan on their summer break in Australia looked puzzled when I said I was going to Japan for the Rugby World Cup (admittedly, they were from Ibaraki Prefecture, an hour or so north of Tokyo on the Joban Line, where no matches are being played). Also in Australia, when people ask why I am going to Japan the response often is, “Do they play rugby in Japan?”

Undoubtedly, when RWC2019 begins this Friday at Ajinomoto Stadium the vast majority will get on board. Not everyone is a diehard rugby fan, but when a spectacle such as the Rugby World Cup is on your doorstep you can be assured that the populous will respond and Japanese ‘omotenashi‘ (hospitality) will come to the fore. At the 2015 tournament, 25 million in Japan tuned in to watch Japan v Samoa on their television sets, so the interest is there. The other takeout from that tournament held in the UK was the 34-32 last-minute win over the Springboks by the Japanese Brave Blossoms; recreated in cinema with the just-released “Miracle in Brighton“.

Rugby Union has a long history in Japan dating from 1866 in Yokohama and, while being more popular in the universities, the company based Top League has started to attract larger crowds. Unfortunately, Japan’s Super Rugby team the Sunwolves will be axed from the competition after the 2020 season, though I’m sure their company based Top League will eventually open up to international teams from Hong Kong and Perth (convincing the JRFU will be a challenge, though).

All and all this bodes well for a spectacular tournament that I am very much looking forward to attending. 楽しみですネ‼ 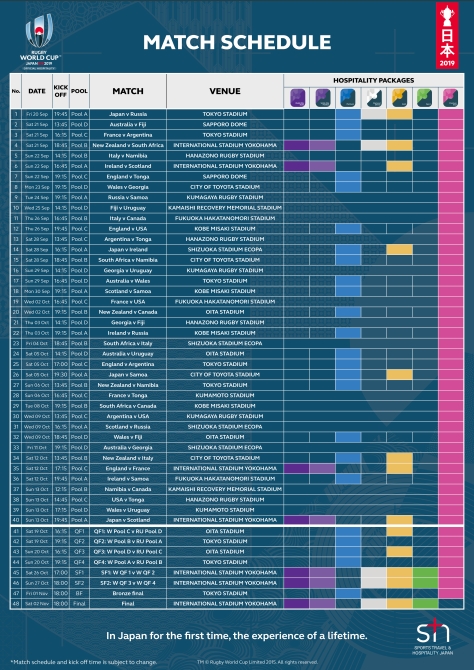