“We shall not cease from exploration
And the end of all our exploring
Will be to arrive where we started
And know the place for the first time. ”

As I board QF 537 at Brisbane Domestic Terminal the Third Test against the French is kicking off at Sydney Football Stadium; where, at the 11th hour, I was granted a coverted media pass to attend the sold out match. Thanks to a man I just happened to run into at the Sofitel in Brisbane two weeks before, Bill Pulver, CEO of Australian Rugby Union (ARU). I had introduced myself as the Editor-at-Large of Brisbanerugby.com and he handed me his business card and said, “Whenever you are in Sydney, give me a call.” Well I wasn’t in Sydney, I was going there, and it was 11:46am in Brisbane.

Now we go back two weeks to June 4th when I just happened to be walking through the Sofitel lobby, because I knew I could get a hit of my latest addiction, free Wi-Fi. Like a junky suffering withdrawal, I took my Galaxy S5 and gingerly searched for the free Sofitel Lobby Wi-Fi. Typed in “accept” and sat back in relief while my emails, Twitter, Facebook, Instagram etc. loaded. I ordered a coffee and looked around at my fellow junkies tapping away at the phones, tablets, laptops etc. with sheer pleasure on their faces, like a heroin attic scoring a hit in Fortitude Valley.

I glanced over to the reception area and noticed a young gentleman that I had never met before, but had first seen on the rugby pitch 11 years ago at Lang Park in the 2003 World Cup. With a sense of disbelief I walked over to the man and introduced myself, to which he replied, “I’m Freddy”.

Yesterday, Bill Pulver, CEO of the ARU, announced that initial discussions with the CEOs of the five Australian Super 15 franchises on SANZARS proposed format for Super 18, coming into effect in 2016, are positive. Greg Growden, from ESPN scrum.com, told me this morning it was “ridiculous”. On Foxtel’s The Rugby Club last night they discussed the concept and I understand Tim Horan’s wish for a South Pacific team to be included, but television rights demand that greater audiences in Asia will benefit from their inclusion. Obviously with the 2019 World Cup in Japan, including matches in Hong Kong & Singapore, a franchise based in Tokyo or Osaka is almost a fait accompli.

With the time zone of Japan only being one hour behind Eastern Standard Time, or an hour ahead of Western Australia, the television audiences in these areas is where the money will be generated for Murdoch & Co. Even if some of those “Asian” matches were played in Hong Kong or Singapore, they would align with the Perth time zone. After all, as Pulver says, the money is in the television rights and the positives he was hinting at was some Super Rugby matches will be shown on free to air channels.

Please add your comments to this blog.

The Gold Coast 7s party is over for 2013 and the Kiwis finally claim the spoils after two exhilarating days of action defeating the Aussies 40-19 in an exciting Cup Final where initially the local team lead 12-0 after two quick tries. All the weekend action was hot on and off the field with the Robina Stadium bathed in glorious sunshine, until the twilight sessions began, of course. The usual costumed spectators from ninja turtles to ostrich jockeys were in the crowd to support Round 1 of the HSBC Sevens World Series.

Last year’s winners Fiji, under new coach, former England boss Ben Ryan, proved not quite up to their usual high standard. Despite a loss to Wales they did top Pool C, however they squandered this opportunity losing to England, 12-26, in the Cup quarter final. As a consolation, they did win the Plate with a rousing 36-0 victory over Kenya.

The Bowl was won by France 19-14 after a strong challenge from Canada that went into extra time. France were relegated to the Bowl after losing 5-29 to South Africa and 12-26 to England in Pool B on Saturday. Canada were their due to a count back in Pool C, where the top three teams finished on 7 points. Fiji were given the top berth with Wales second.

Team USA took out the Shield Final 22-0 over Portugal, after coming third in a tough Pool A with the likes of New Zealand, Tonga and Kenya.

England showed the talent they had in their stocks by defeating South Africa 47-0 in the play-off for third. After a mammoth Cup semi-final loss to Australia 19-24, South Africa, were just too weary to put up much resistance to an English side that had scored the first points against New Zealand for the tournament in their 5-14 semi-final loss. But, the New Zealanders, as they showed all tournament, with an unblemished score line after day 1, that they were always going to be the team to beat. Under coach Michael O’Conner the Aussies came out firing in the Cup Final leading 12-0, however their draining semi-final with South Africa, that went into a second 5 minute extension, proved too much against the much fancied Kiwis.

Rugby league school of excellence, Keebra Park State High, proved their versatility by once again winning the national schools sevens title 24-10 over TSS in an all-Gold Coast affair. Forced off the main oval to Robina station reserve due to Australia’s semi-final double extra time with South Africa did not deter from the determination for Keebra Park to secure their fourth straight 7s title, extending their unbeaten record to 40 matches.

Numbers attending the two days were 25,320 which is down on last year’s 27,000+. Rugby Union boss, Bill Pulver, will be sitting down with a team of professionals to see how an improvement can be made to have more people attending. The Gold Coast contract is up next year, 2014, and it’s important to keep this location leading up to the 2018 Commonwealth Games, which has sevens, as the Gold Coast is the host. 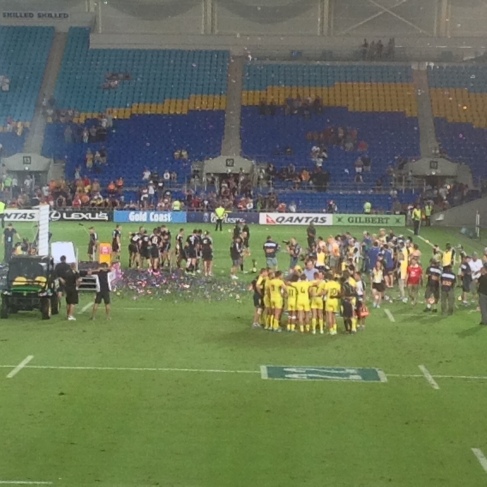 The first round of this season’s World Sevens rugby junket 2013/14 started at 10:30am on the beautiful Gold Coast with New Zealand playing USA in their Pool A match. The Kiwis were victorious over the Americans 38-0. This was followed up by the ever improving Kenyans, with a huge supporter base, smashing the Tongans also by 38-0. With a rain shower threatening, the action was boiling over on the field. And when the Aussies squandered a 21-0 lead over Scotland to draw their match, upsets were looking like a strong possibility.

I was with a nervous Australia 7s coach, Michael O’Conner, watching Samoa playing an impressive Scottish outfit. The latter almost forced another draw, however the Samoans were not giving up easily and managed a 19-12 win. O’Conner said, “We just have to win our next two matches to top our pool.”

Australia then accounted for Argentina 22-7 in the following match with their eyes firmly focussed on the 7:46pm match with Samoa. In the meantime New Zealand was progressing through nicely, easily beating Tonga 26-0 and defeating Kenya 31-0 in the twilight to top Pool A. Last year’s champions, Fiji, were looking alright until they lost to Wales in their last Pool C match 19-22 to Wales. Since Wales had lost 17-24 against Canada earlier in the day the top three teams all finished on 7 points. On count back Fiji topped Pool C.

South Africa had an impressive first day defeating France 29-5, Spain 38-7 and a strong England side 22-14. They topped Pool B and will play Wales tomorrow in the Cup quarter final, with England placed second in Pool B they will have to face Fiji in the quarters.

The Aussies played some of the best rugby I have seen them play to defeat Samoa 12-0 nil in the final match of Day 1. Thereby topping Pool D, which sets them up for a quarter final with Kenya tomorrow at 12:42pm –just like last year when they beat eventual champions Fiji in their last pool match. With Samoa coming second in Pool D, they will have to play the Kiwis at noon in their quarter final.

Basically going to form, Sunday’s action is going to be a mouth-watering feast of 7s rugby. If you are still without a ticket there are a few available at the gate so come on down. 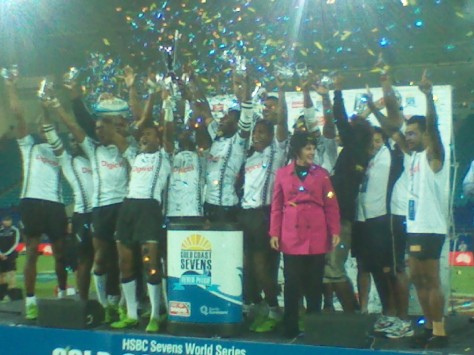 This November will mark the 25th anniversary of the Southern Districts Rugby Union Football Club’s epic undefeated tour of the USA and Canada. On the 26th of November, 1988 a contingent of 48 members, both players and supporters, departed Brisbane Airport bound for Vancouver. Led by Tour Captain Mark “Nugget” White, the youngest member was Brad Moriarty, at just 10 years old, and the eldest, Henri Harries, at 54 years of age. The tour party grew to 50 as we were joined by Ken & Sue Wills, who had travelled via Europe before coming over to Vancouver.

The tour was the culmination of some of the finest moments of the club’s history: winning the Brisbane A Grade Premiership in 1986 (not since 1958); followed the next year, 1987, by defeating Parramatta in Sydney for the Australian Club Championship; and a star studded Colts 1 side winning the Premiership in 1988. As the youngest player in the touring party, at 19, and having played in the Premiership winning Colts 1 team, it was a particularly memorable occasion.

After a massive travelling effort of some 22+ hours, from Brisbane to Sydney to Honolulu to LA-X, then finally a Delta Airlines flight up to Vancouver. Upon arrival we were expected to play rugby against Meraloma RFC in the rain & icy conditions out on North 10th Street near the Molson Brewery. Being the youngest member I was relegated to the bench; however, it wasn’t too long before I debuted for Souths seniors as a replacement flanker. I remember getting tackled and bracing my fall with my hand in what I thought was a puddle of water; which turned out to be ice… The first match was won and this was followed by much drinking and merriment well into the night and onto the streets of downtown Vancouver.

After three days we were back in the air and out to Las Vegas where we stayed at the iconic Landmark Tower. Gambling and stage productions was the goal here, although a few participated in a 7s tournament. A road trip was then planned, the two coaches were loaded with Coors & Budweiser before we headed out to Hoover Dam and then a night at the Grand Canyon. A scenic trip through Monument Valley saw us arrive in Scottsdale, Arizona for our third match & a memorable win.

Back on the coaches we continued to San Diego where we played & won against UCSD to complete our “Grand Slam”. Trips to San Diego Zoo & Tijuana were arranged before heading up to Los Angeles for more sightseeing at Universal Studios & Disneyland.

The main tour group departed LA on December 13th for two nights in Honolulu en-route back to Brisbane; whilst a few of us decided to stay on and extend our American experience. Those of us who stayed on, caught up with Gary Christison, a late withdrawer from the original tour, for Christmas 1988 in New York, New York. 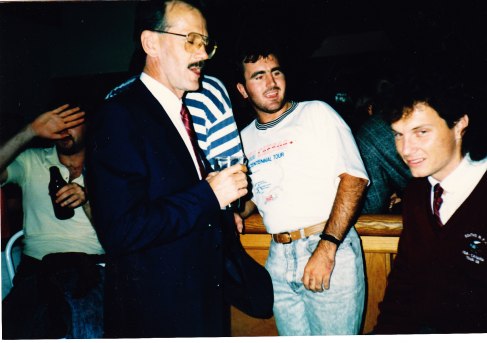 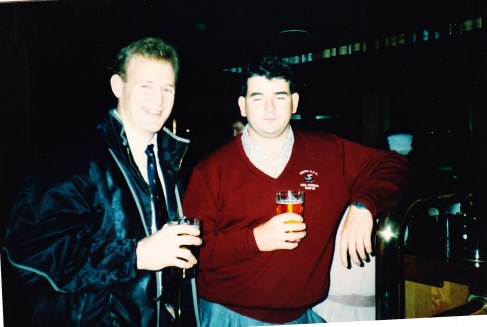